John Cleese on extremism, thanks to Charles Nelson Chuckles for the link

Posted by Dr. Russell Norman Murray at 7:45 PM No comments:

Quote: There is a God, and it is not you

Posted by Dr. Russell Norman Murray at 2:58 PM No comments: 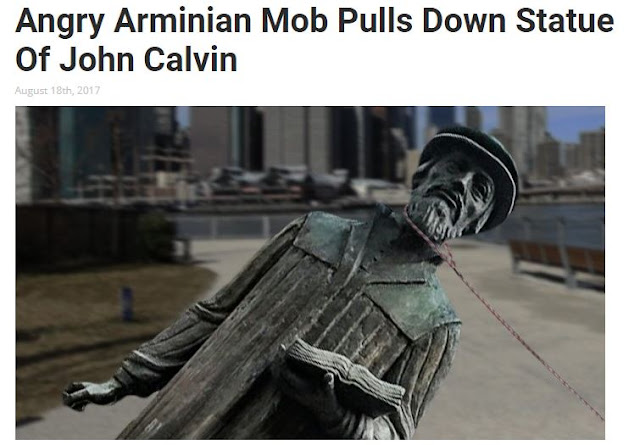 The Babylon Bee: August 18 2017
The cited article is satire.
---
Rather than replacing a statue, in general, I would prefer that a statue would have a written explanation, an epigraph, which would provide an attempt at an objective, historical account in regards to the subject (s) of the statue.
But this approach requires cooler heads, more interested in truth than the reactionary, political agenda of the day. By the way, eras from now, some of our present western views may be exposed as less than good, by many. Certainly, in the culminated Kingdom of God (Revelation 20-22) this realm and world system will be condemned as being infected with problems of evil.
Theologically, keeping past statutes and allowing the public presentation of past worldviews, formerly embraced by a society, or at least, aspects of a society, demonstrates that humanity is less than perfect. I acknowledge there have been improvements in our world from previous eras in many ways. But, apart from the religious history, such as within Genesis in the Hebrew Bible, prior to the fall, humanity has been imperfect by nature in every era. History documents this as fact, despite human evolution and progress (non-Darwinian, in my view).
Humanity is universally corrupted through sin, and there has been a fall of humanity (Genesis 1-3, Romans 1-3) which greatly damages, God to human relationship and fellowship and human to human relationship and fellowship. There obviously exists racism and other human to human evils. Presently we have imperfect, tainted people and imperfect, tainted, human philosophy, theology, politics and worldview. According to scriptural revelation, this can only be ultimately fixed through the atoning and resurrection work of God incarnate, Jesus Christ, applied to persons (1 Corinthians 15).
Posted by Dr. Russell Norman Murray at 2:38 PM No comments:

• My good friend, J. C.Zombie was visiting. He was showing me You Tube videos. He came across a famous, late guru that taught that his followers were vegetarians, because (paraphrased) if one eats animals, one takes the animal nature upon self.

• J.C. Zombie stated: (paraphrased) 'If a person eats plants, do they have a plant nature?' Good point, I said.

• One of the interviewers of the guru suggested that his view would be challenged as unscientific, by scientists.

• The guru replied (paraphrased) that this belief was fine for his followers as long as they have peace with the view.

• The guru noted (paraphrased) that such conflicts and intellectual challenges, add confusion.

• For me this belief and explanation from the guru highlights a classic difference between his religious view and biblical Christianity, especially within a Reformed tradition.

• Reason is important in order to analyze and know truth. Christianity is a revelatory faith and philosophy, but this divine revelation from scripture is to be rationally understood and theologically developed, while simultaneously the Holy Spirit of God is required as aid in understanding the truth. Illumination with reason should be requested of God.

• 2 Timothy 2:15 King James Version (KJV) 15 Study to shew thyself approved unto God, a workman that needeth not to be ashamed, rightly dividing the word of truth.

• 2 Timothy 3:16-17 King James Version (KJV) 16 All scripture is given by inspiration of God, and is profitable for doctrine, for reproof, for correction, for instruction in righteousness: 17 That the man of God may be perfect, thoroughly furnished unto all good works.

• 2 Peter 3:14-16 King James Version (KJV) 14 Wherefore, beloved, seeing that ye look for such things, be diligent that ye may be found of him in peace, without spot, and blameless. 15 And account that the longsuffering of our Lord is salvation; even as our beloved brother Paul also according to the wisdom given unto him hath written unto you; 16 As also in all his epistles, speaking in them of these things; in which are some things hard to be understood, which they that are unlearned and unstable wrest, as they do also the other scriptures, unto their own destruction.

• A good friend from Europe, a little older than me, sent me a photo of a much younger woman that was also much thinner than him. He stated that she contacted him and that she might be interested in him.

• I opined that as long she was legally an adult and biblically available as single, and they related as Christians, it was fine. He opined that she was probably after his money.

• I replied that he not bother with someone that wants to exchange 'beauty for money'. I received such offers often. The conversations are always pathetic.

• These market value approaches to dating, at least risk, sin; I cannot judge the motives and mind of any person.To be clear, that is up to God (2 Corinthians 5: 10). But, there is significant sin, in general, I reason.

• I opine that many people in the Christian Church are single, divorced, etcetera for embracing views related to market value dating and market value marriage and as well many promote these views as being socially enforceable for others in the Church.

• This can be a Christian and evangelical form of political correctness.

• On this issue, I often state that there is enough sin going around from everyone concerned, including from myself. The Church requires biblical guidance through the Holy Spirit. The Church needs reason from God.

ERICKSON, MILLARD (2003) What Does God Know and When Does He Know It?, Grand Rapids, Zondervan.

Posted by Dr. Russell Norman Murray at 5:15 PM No comments:

2010 How to Write a Successful PhD Thesis: My Journey Through Hell to Success: E-book